Immigration and family law is an increasingly hot topic with the rise of family separations at the border. Trump’s “zero tolerance” policy in creating a lot of backlash from all sides of all parties. In times such as these, it’s very easy to get lost in misleading information and the lack of fact-checking.

Family Separations Are Due To Democrats

This is a very popular belief among the Trump Administration seeing as Sarah Huckabee Sanders repeatedly states that this is a “legal loophole that Democrats refuse to close.”

Unfortunately for the Trump Administration, this is a downright lie. There is not a law that demands children to be separated from their parents at the border. Trump’s “zero tolerance” immigration policy makes sure that every illegal immigrant crossing the borders is immediately prosecuted in a criminal court. Although the policy does not blatantly state that families will be separated, it is inevitable with their procedures.

And as Trump continuously calls for Democrats to “CHANGE THE LAW,” he must fail to remember that Democrats are the minority in both chambers of Congress. They’re unable to make such huge policy changes in order to stop his “zero tolerance” policy.

And I’m sure many readers are thinking, “well, what did the United States do before the Trump immigration policy?”

When George W. Bush was president, he also had a “zero tolerance” immigration policy; family units, however, were usually exempted from their streamlined process of prosecuting and deporting immigrants. And under Obama, families were typically detained together as opposed to ripping babies from mothers.

In short, there are many ways to show that this issue is totally within Trump’s wheelhouse to change. 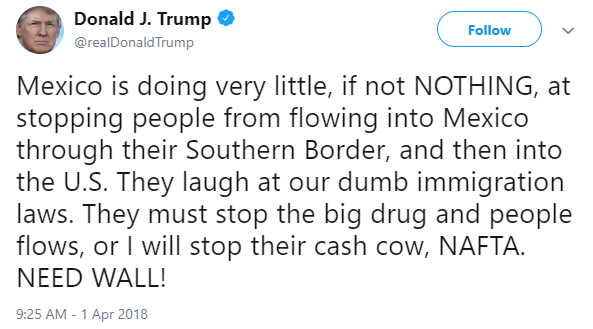 President Trump also bashes Mexico saying that they do nothing for the United States when it comes to immigration and deportation. However, he’s totally wrong; Mexico has deported several thousand Central Americans in recent years and worked closely with the US to control the Southern border. Immigration statistics show that “Mexico intercepted 173,000 Central Americans in fiscal year 2015, 151,000 in fiscal year 2016 and just under 100,000 in fiscal year 2017.” I’d say that’s a lot of work coming from a country that Trump says “does nothing for us.”

Mexican migration agents have formed a formidable deportation force made up of migration agents, local and federal police, soldiers and marines to create a “containment zone” in Chiapas state. Nearly half of migrants don’t make it past this zone. The data shows the exact opposite of what Trump is claiming; Mexico is making great efforts to prevent the upward trickle of immigration to the United States.

Other Countries Don’t Have Immigration Judges And We Have Thousands!

Yet again, President Trump is quoted talking about the United States’ deportation and how, apparently, no other country in the world has these same issues. He has been quoted saying that no other country does it like us. Technically this could be true; some countries don’t call the people in charge of evaluating requests for refugee status “judges.” However, they do the same job and serve the same purpose as our immigration judges.

Immigration courts aren’t really courts at all– they aren’t even part of the judicial branch. Instead, they’re considered administrative and fall under the Department of Justice (DOJ). Contrary to Trump’s popular belief, other countries are equipped with immigration judge equivalents. Countries like Canada, Sweden, Italy, Serbia, and the UK have similar immigration-like judges and procedures.

No matter how you dice it, we are nowhere near the “thousands” mark.

Fact-checking the president has become somewhat of a hobby for many people, especially since he tends to throw out figures and points fingers without first researching his comments. Although it is fun to poke fun, it’s a dangerous game he plays and it is up to everyone to keep our elected officials accountable and trustworthy. We are only as good as the information we spread.